What is a prenup, and why would I want one? 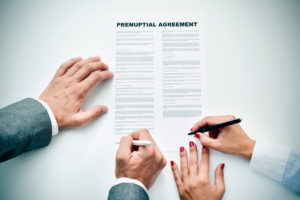 A prenuptial agreement, also known as a premarital agreement or a prenup, is an agreement between two prospective spouses as to the management, control, and division of assets and debts in the event that their marriage to each other ends in a divorce.

Prenuptial agreements aren’t just for the rich and famous. If you have any type of assets prior to getting married, a prenup will ensure that you don’t lose what you earned before marriage. Common assets that you can protect with a prenup include:

Experts don’t agree on the math, but anywhere from 39% to 50% of U.S. marriages end in divorce, and the more times a person has married, the higher that percentage rises. Divorces are usually messy, emotional nightmares… but they don’t have to be. By planning ahead and addressing many of the issues that will come up in a divorce before even saying “I do”, much of the arguing, hurt feelings, and litigation costs can be avoided. Prenuptial agreements are excellent tools to handle many of the decisions that are typical during a divorce.

What makes a prenuptial agreement valid in Florida?

In Florida, a prenuptial agreement must meet certain requirements to be valid in court:

What can a Florida prenuptial agreement legally address?

The legal complexities surrounding prenups in Florida are almost infinite, and there’s no way to definitively say what is allowed and what is not. All issues will depend on the situation, primarily financial, of both parties involved. However, items that are frequently included in a Florida prenup include:

Can a prenuptial agreement be changed?

Prenuptial agreements can be modified for various reasons in Florida. The most common reason for a court to allow modification is a significant change in the income of one of the spouses, requiring a renegotiation of alimony. Modifications must be agreed upon and signed by both parties to be valid. Prenups can also be revoked or suspended if both parties agree.

What is NOT allowed in a Florida prenuptial agreement?

Many people mistakenly think they can include child custody arrangements or predetermine child support payments in a prenuptial agreement. However, this is never the case. Only judges in Florida are allowed to make these decisions, which must always be in the best interest of the children involved.

Prenuptial agreements are typically signed months in advance of the wedding ceremony. If that ceremony doesn’t happen, then the prenup never goes into effect. The same is true for annulled marriages or marriages deemed illegal.

While your fiancé may agree to give you the world in the prenup, it probably won’t shake out like that during the divorce. Prenuptial agreements that are extremely one-sided are usually modified by a judge to provide a more equitable distribution of assets (and debts).

Many people have negative feelings about prenuptial agreements, but if you have anything you wish to protect during a possible divorce, having a prenup is a smart move. It’s always better to introduce the idea of a prenup early in an engagement (no springing it on them at the altar, please!) to avoid surprises and give each of you the proper time to discuss disagreements and inventory assets. When you’re ready to draw up a prenuptial agreement for your upcoming vows, trust the divorce law experts at Caveda Law Firm to develop a fair and enforceable agreement that everyone agrees on. Call (813) 463-0800 or contact us online to set up your free consultation and take some of the stress off of your big day!