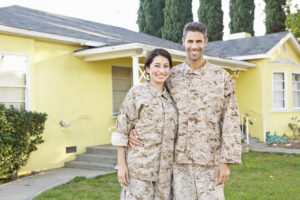 There’s a lot of conflicting information out there about military divorce. Higher divorce rates among military couples have always been rumored, but the evidence is sparse, and more research is needed. One thing guaranteed in a military divorce is that you will run into issues that civilians never face. A few of the most common issues military members face when divorcing are:

The federal government considers a military pension to be a marital asset and allows state courts to treat it as such when deciding how to divide marital property.

Many people mistakenly believe that military members must be married at least 10 years before the spouse has a right to the pension, but this is not true. A non-military spouse may be entitled to receive a portion of their military spouse’s pension no matter how long they were married. The Ten Year Rule only refers to how the pension will be delivered to the ex-spouse, not whether they have a right to it or not.

The SBP allows ex-spouses of military members who received pension payments from the divorce to continue receiving payments after the military member’s death. Inclusion of the SBP is not granted automatically in a divorce proceeding. Having an attorney experienced in military divorce and SBP is crucial to ensure all parties are protected well into the future.

Complicating military divorces further is the SCRA. The SCRA allows military members to put certain legal proceedings on hold while on active duty. Invoking the SCRA is common when the military members are overseas at the time divorce court is scheduled. The SCRA is designed to protect military members from unfair default judgments being levied against them, but it can cause significant delays in a divorce case.

Some ex-spouses of military members and their children may be eligible for federally-sponsored Tricare military medical insurance or insurance through the Continued Health Care Benefit Program. For ex-spouses or children with chronic medical issues, insurance can be a critical element of divorce proceedings.

Military service can cause child custody arrangements to be exceptionally complicated. Traditional child custody schedules just aren’t going to work, but moving children around all the time following a military parent’s orders is undesirable as well. An attorney knowledgeable in military child custody is essential to ensure the children’s best interest is considered above all else.